Earlier this year, the specialized transportation team out of our Portland office faced a major challenge. It was not the size or weight of the load to be moved. It was the timeline on which the move had to be accomplished.

The task we faced: moving three stainless steel ozone tanks across a rural landscape from Hillsboro to Newberg. With just five weeks notice, the team had to plan the route, engineer the trailers, and accomplish the move. That we pulled it off without incident explains why Omega Morgan received a 2019 Hauling Job of the Year Award from the SC&RA this April.

Most hauling companies can take on tank hauling jobs like this one when given the time. Not nearly all of them, however, are able to accomplish the job on such a tight timeline and under such challenging road conditions.

It began with a five week notice to move three ozone tanks, each about 22 feet in diameter, across 39 miles of mainly rural land roads. The tanks in themselves were too large to simply be hauled without running into significant issues like power lines and traffic lights. A thorough planning effort was necessary.

At the start of the project, our team began to scan potential routes between Hillsboro and Newberg. Within two days, we had found a route that minimized the challenges posed by electric lines and traffic lights. From there, our team began communication with six individual local traffic authorities to ensure safe passage.

The next milestone was preparing the equipment for the move. Omega Morgan built saddles with foam padding to securely hold the vessels in place and prevent damage, designed to hold the tanks rotated in a way that minimized the height above the road. These saddles also received custom cut holes to accommodate nozzles protruding from the sides of the tanks.

On schedule, our team was lined up and ready to go. We received the go-ahead from local authorities as well as approvals on 12 individual permits, and began the trip. Six pilot cars and six bucket trucks accompanied the convoy, totaling a length of up to half a mile for the two-night trip.

The haul took eight hours the first night, and four and a half hours the second. It included removal of street lighting on one side of the road for clearance, as well as pulling and raising wires in various places. Careful and thorough planning had our team working well from the start to streamline the entire journey and its many steps.

The Result: Zero Incidents and an International Award

Thanks to the careful planning and execution of the entire haul, our team was able to complete the job and deliver the tanks with zero incidents. The short time frame had given Omega Morgan only one week to determine whether or not the job was realistic. That left four weeks for planning and execution, all of which were used to optimize the haul.

It required planning around the clock, foresight on potential routes, and close cooperation with six local authorities. In total, our team spent 1,600 man hours in preparing for the haul, and more than 650 hours to make the haul itself.

The result was exceptional. In April 2019, our team was recognized with the Specialized Carriers & Rigging Association’s Hauling Job of the Year award in the “trucking in less than 160,000 lbs.” category, which rewards the successful planning and execution as well as safety considerations for especially challenging hauling jobs. That recognition, especially in light of the short timeframe, makes this job a perfect highlight of the experience and capabilities of our specialized transportation team. 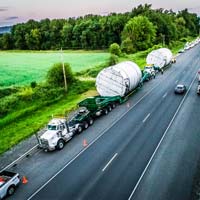