The client trusted Omega Morgan and turned to their logistics services team to complete the challenging project. Omega Morgan’s familiarity with the area and this type of transportation project gave them specific insight into the logistical challenges that they would encounter. Omega Morgan realized the most critical factor would be ensuring that the load would arrive at the Port of Vancouver in time to load onto a vessel for transport overseas.

The process began with Omega Morgan performing a jack-and-slide operation at the Coyote Springs Power Plant. After lifting the 507,000-pound transformer from the pad it rested on, the team loaded it onto Omega Morgan’s ten-line platform trailer. In addition to the Jack-and-Slide operation, it was necessary to use a reach forklift to load out and haul the needed transformer accessories.

Upon arrival at the Port of Morrow, the Omega Morgan transportation and logistics services team met with the partnering barge company to load the trailer, transformer and accessories onto the waiting barge. Omega Morgan had engineered and constructed roll-on and roll-off transition plates to facilitate loading the transformer and trailer onto the barge. Once successfully loaded onto the barge, the Omega Morgan team cribbed out the loaded trailer to ensure it was ready for transport by water.

Using an Omega Morgan designed lashing plan, the partnering barge company then lashed the load directly to the barge. Once the trailer was loaded correctly and secured, the barge company transported the cargo to the Port of Vancouver to meet a ship that would be taking the transformer overseas.

Omega Morgan and their team planned diligently for the move, and were flexible in completing the job since the arrival date of the ship changed several times. The changing time frame required Omega Morgan to adjust their planning and when they dispatched the crew to ensure that the load arrived at the Port of Vancouver when needed.

Omega Morgan exceeded the client’s expectations and completed all of the assigned duties safely and on-time. The client was pleased that Omega Morgan coordinated efforts with the railroad that owned the tracks they needed to cross, the port authorities at the Port of Morrow, and the partnering barge company moving the transformer to the port of Vancouver. 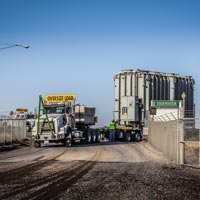