Two days after departing from Vancouver BC en route for Tokyo, Japan, the container ship MOL Presitge suffered an engine room fire causing her to be adrift 207 nautical miles southwest of Haidi Gwaii, British Columbia. Of the five crew members injured in the incident, two were airlifted by the Royal Canadian Air Force to receive medical care.

Foss Maritime’s ‘DENISE FOSS’, which is based in Neah Bay, Washington, retrieved and towed the 961-foot dead in the water vessel to Seattle. All of the ship’s containers, including the spoiled refrigerated product, were removed at Terminal 18. Foss then towed the ship over to their Terminal 5 dock where Omega Morgan’s crane services yard is located.

Omega Morgan began work on removing and re-installing the 280 fire suppression bottles that were emptied during the incident. We were able to hoist two fire retardant bottles at a time using the National NBT 60 (60-ton boom truck) with a custom-fabricated tank rack. The access hole for the fire suppression units measured 3’ x 3’ square, not leaving much room for error with the bottle rack measuring 2’ in diameter. 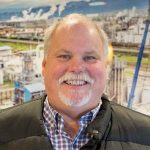 30+ years experience in the crane & rigging industry with a focus on machinery moving, equipment installations, specialty rigging and facility relocation's both domestically and internationally.