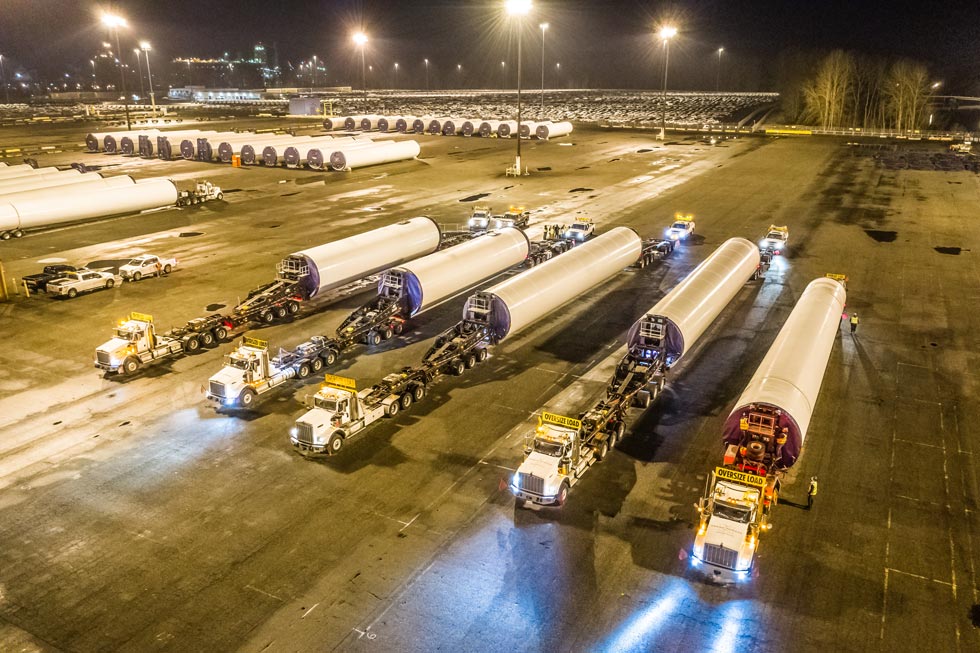 This January, Omega Morgan’s Portland office stepped up to the plate to facilitate the transport of renewable energy equipment. For the first time ever, the Port of Portland’s Terminal 6 dock took on the handling of wind turbine tower sections. Terminal 6 is a multi-use facility that got its feet wet with heavy breakbulk cargo with this shipment. The equipment was destined for a renewable energy site in Arlington, Oregon. As soon as we were brought on, our Specialized Transportation team jumped into strategizing.

We determined the optimal route and timing that would cause the least disturbance to the public and ensure a safe transport for all parties. In the early morning hours, 153 wind turbine parts began their 145-mile journey east. Each heavy load, accurately named a “superload,” was 245 feet in length.

Ideally, there is a direct and accommodating route, but when the options are limited, we find ways to make it work. Factor in some unavoidable tight corners, and you have some pretty complicated maneuvering challenges. The skill of our transport team was put to the test several times along this route. One particularly difficult test was getting all 153 components around the narrow turn from I-5 South Bound onto Highway I-84. It was a success; all of our trucks made it to their destination without incident.

At Omega Morgan, we have been moving large machinery since 1991. The not-so-secret key to our success? Planning. We want to eliminate risk and increase efficiency when transporting heavy, complex equipment. This demands thorough routing, great communication, and a lot of collaboration upfront with trade and transportation partners.

Every successfully planned and executed move is a win. Perhaps the most satisfying aspect of this project was playing our role in bringing renewable energy to the state. With the support of local partnerships, we are finding ways to efficiently and safely make smart moves that power the Oregon economy. Check out ODOT’s video below to get a snapshot about those partnerships and what it takes to move a superload.