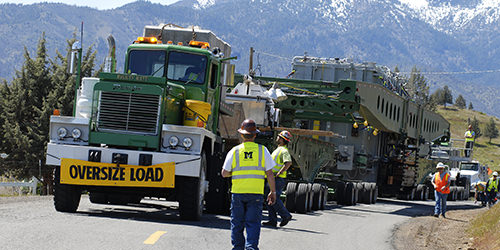 The name change is part of management’s plan to launch a branding and communications campaign that will let the world know about Omega Morgan’s expansion into national and international markets.

The company has doubled in size each of the past several years and sees a bright future, especially as it focuses on energy, technology and aerospace. As a result of Omega Morgan’s expansion, it is looking for mechanically minded foremen and experienced Class A licensed drivers. In the very near future, the company plans to acquire companies that will provide additional expertise and allow it to expand its integrated services.

“We are very excited about our prospects for future growth,” said CEO Jeff Morgan. “We have great customers and employees. Part of what we see is a big opportunity for the younger generation of Omega Morgan employees to step up and help run the company.”

Omega Morgan thinks big. Most of the company’s 275 employees are involved one way or another in gargantuan moving projects, like packing up and moving entire factories for Fortune 500 companies or transporting airplane parts for the world’s largest aeronautics manufacturers. Omega Morgan’s specially built trucks may be seen hauling huge turbines and transformers for hydropower companies and substations for electrical power companies, but then again, other employees may be at a big semi- conductor plant quietly and carefully moving a multi-million dollar fabrication machine.

Omega Morgan’s highly skilled employees also have moved objects as small as a 500-pound safe up the side of a building and through a window into a luxury condo as well as a heavy piece of sculpture out of a corporate building and priceless pieces of art for wealthy homeowners.

“It’s trite to say ‘we can move it all,’ but that’s really pretty true,” said Morgan. “We enjoy analyzing moves that seem to be impossible and then accomplishing them in a timely fashion and within the budget we agreed to.”

With a number of customer testimonials backing up the company’s claims, Omega Morgan has won contracts throughout the U.S. and in 25 additional countries. It also has opened an operation in Canada where, together with Arizona, it sees ongoing opportunities.