Hundreds of vehicles will need new route while ferry is repaired

PORTLAND, Ore.—April 16, 2012 — Ferries are among the most romanticized forms of transportation, linking passengers with images of the Old West when times were quieter and one could take a leisurely ride across the river, perhaps on horseback or in a Model-T car.

Not many ferries still traverse rivers in the western United States, and in fact just three still operate on Oregon’s Willamette River—Canby, Wheatland and Buena Vista. However, they are an important mode of transportation for those wanting a short-cut to smaller cities close to the river. An estimated 85,000 drivers, walkers and bicyclists ride the Canby Ferry each year, according to Darrel Burnum, bridge maintenance supervisor for Clackamas County, Transportation Maintenance Division.

On April 16, Omega Morgan, one of the West Coast’s leading heavy equipment transport companies lifted the 160,000 lb. Canby Ferry out of the Willamette where it began a safety inspection by the U.S. Coast Guard. That means leisure and business travelers will need to find a new route between Canby and Wilsonville until the ferry is back in the water. While the magnitude of the maintenance repairs will not be known until the Coast Guard finishes its inspection, it is estimated that the ferry crossing will be closed for two weeks. 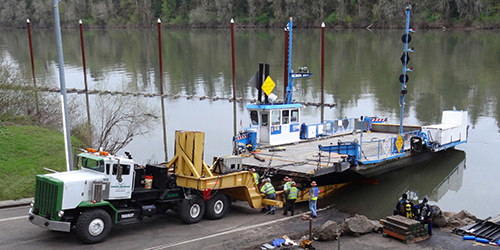 Omega Morgan spokesman Erik Zander said a number of considerations were important to successfully moving the ferry to the nearby landing. “Foremost was the high water caused by record rainfall in March,” he said. “We needed just the right amount of water in order to get our equipment underneath the ferry.”

“We look forward to returning the Canby Ferry to the water as soon as possible, allowing our regular customers and visitors to the area a pleasant and efficient way to cross the Willamette,” Burnum said.