PORTLAND, Ore,—October 1, 2013 — Omega Morgan, a 22-year-old specialized moving company, has its eyes on the aging bridges in the Pacific Northwest. After successfully employing the jack-and-slide method of efficiently moving bridge spans into place for two high-profile projects, the company sees more opportunities in Oregon and Washington.

In January, Omega Morgan moved Portland’s 1,100-foot-long, 3,400-ton Sellwood Bridge across the Willamette River in a single day, in one piece and on an angle, drawing national media and big crowds.

Then in Washington State on the night of Sept. 14, an OM crew of eight jacked up a 915-ton span, slid it upriver and set it onto original concrete piers with new pedestals installed to accommodate the concrete beams arrangement. They slid the bridge span into place in just hours—not days—to get up to 71,000 vehicles-per-day moving across the Skagit River.

That last project came about after the Skagit River Bridge collapsed May 23 when a tall truckload hit several overhead crossbeams. This accident put a spotlight on old and damaged bridges across the U.S.

For example, in 2012, the Washington Department of Transportation said 70 projects across the state would receive a portion of $130 million in federal funds to repair or replace aging bridges.

“Some of these bridges are beyond the point of repair and need to be replaced,” said Kathleen Davis, director of Highways & Local Programs with WSDOT. “Plenty of them, though, can be repaired, which will add many more years of operation to their lifespan.”

Omega Morgan is one of the few companies in the region that does both jacking and sliding of bridges, making it a turnkey operation without any downtime. It takes expertise, too, explains the company’s chief engineer Ralph Di Caprio. “We had less than two inches of clearance on each side of the Skagit Bridge, which was 162 feet long and 60 feet wide. This was really a precise move,” he said.

The well-planned project, including Omega Morgan’s deft jack and slide move, gets traffic moving more quickly, makes commuters happy and has caused politicians to ask why other projects like this can’t be more efficient.

The result is that the state of Washington has organized forums to talk about cost-cutting in similar projects and caused the governor to cite the move as proof of the state’s can-do-attitude and professionalism of the department of transportation.

In an article in the Seattle Times, the question is being asked why other highway jobs seem to take years and hundreds of millions of dollars to complete.

Max J. Kuney of Spokane was general contractor for the project. Kuney hired Parsons Brinckerhoff in Seattle for Skagit bridge engineering and Omega Morgan to tackle the heavy lifting and skidding.

Meanwhile, Omega Morgan pointed south in between the Pacific Northwest jobs and managed to jack and slide two bridge overpasses in Utah. “This is something we like to do and we’d like to have more of these projects,” said Di Caprio. 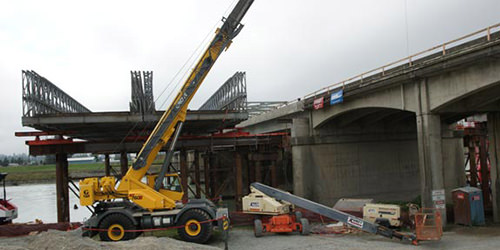