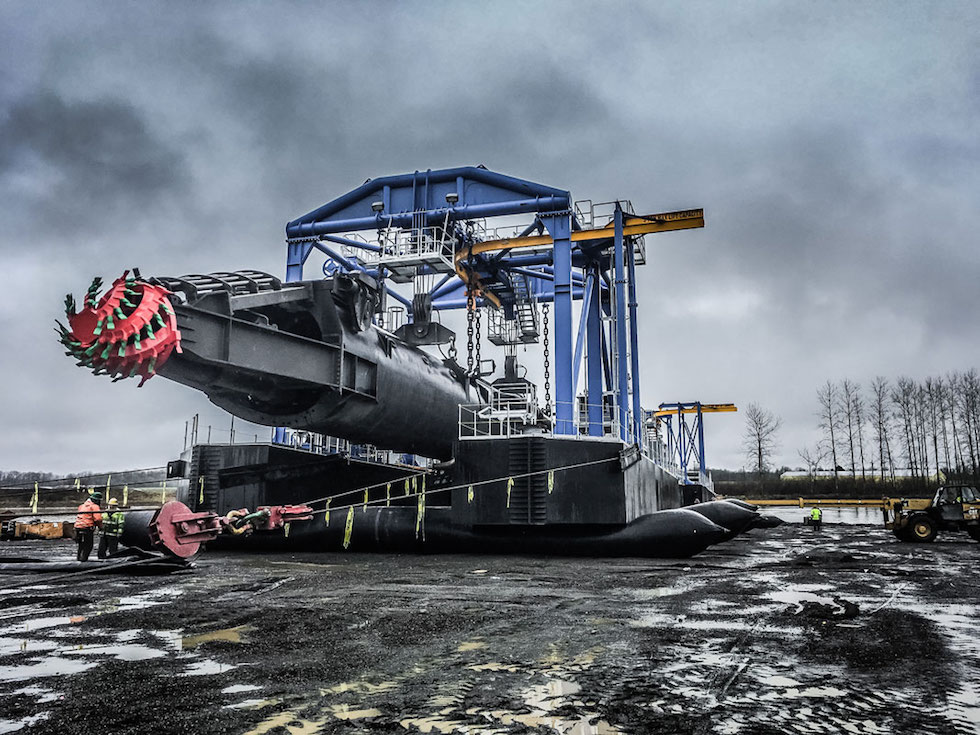 Suction dredges are among the heaviest and largest piece of equipment used by construction companies today. Constructing a new one is a major undertaking, especially if it has to be transported into the right location incrementally. When Omega Morgan’s Millwright teams from our Portland Office partnered with CalPortland, we knew we had our work cut out for us.

From the beginning, the process was complex. The 1.9 million piece of equipment was dismantled and shipped in 40,000 to 50,000 lb parts from Louisiana to the Scappoose, Oregon location. There the the supply company assembled the pieces with assistance of our Portland millwright team. The two-month process prepared the dredge for transport, but was only the first challenge in the process.

Next, we had to move the suction dredge into its final location on CalPortland’s rock pit. The fact that it had been assembled on site was not just cost-effective, but also became crucial to minimize distances. Our solution: multiple 5 foot by 60 foot rubber airbags with up to 15 psi of air pressure each, large and strong enough to transport the 55 foot by 250 foot barge to its final destination.

An added benefit of the airbags was the ease with which they allowed our Portland team to transition the dredge from land to water. That avoided the use of divers or a graving dock, which would have extended the process and significantly increased the budget.

The result was a safe, on-time transport that avoided any damage to the equipment, thanks to careful planning and built-in redundancies. The suction dredge, complete with a ladder arm that allows it to remove materials from up to 155 feet below lake level, was securely launched into the lagoon. A satisfied client will be able to use the equipment to improve operations for years to come.