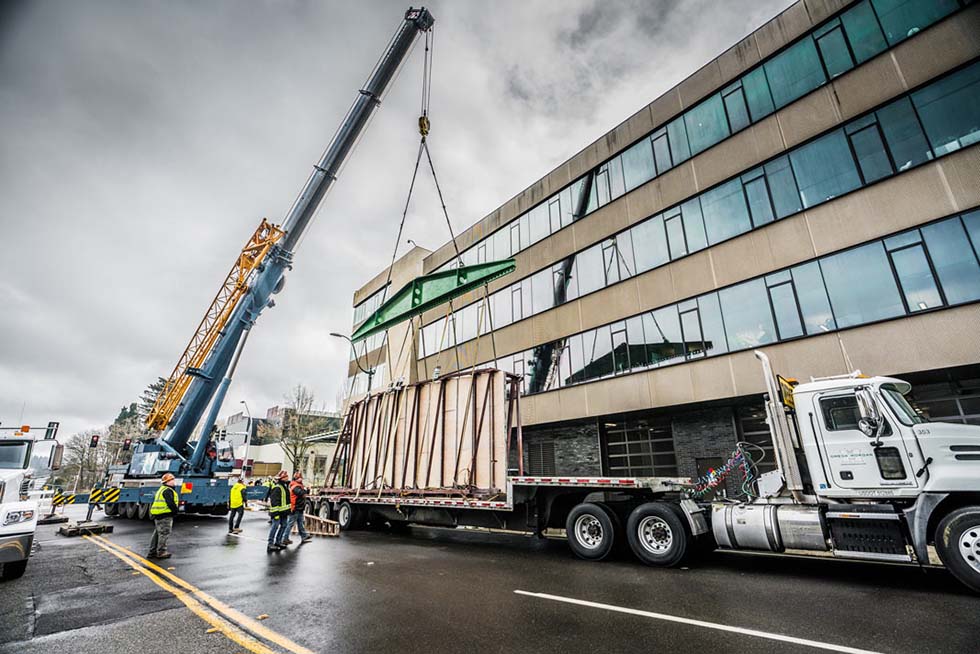 A priceless mural being moved from a building to be destroyed certainly warrants news coverage. If that mural is curved concrete weighing 30,000 pounds with a total of 150,000 glass and stone tiles, the move only becomes more impressive. Fortunately, in one recent project, Omega Morgan’s machinery moving team was hired to get the job done right.

The mural, commissioned by local officials in 1956, is priceless in the eyes of many Olympia, WA residents. It could not simply remain in a building about to be torn down. And yet, thanks to its weight and size of 30 feet by 12.5 feet, moving it was always going to be difficult.

Careful planning was absolutely necessary. Among the biggest challenge was a lack of weight support by the floors the mural had to be moved over. We worked with an engineering firm to determine what support was needed, and installed about 100 shoring poles and 30 I-beams to ensure a safe transport inside the building.

Next came the plan for getting the mural outside. Our team, experienced in these types of challenges, realized that only low-profile air skates would be low enough for the almost 12 ½ foot-high mural to clear the 12 ½ foot ceiling. Setting 12 air skates and jacking the mural onto them allowed us to clear the ceiling by almost exactly one inch, while distributing the weight evenly enough to avoid flexing the construction.

Once outside, our Grove GMK 5275 crane allowed us to pick the mural with 12 points to continue the theme of weight distribution. Two permits helped us clear the streets, allowing for a safe and uneventful move into its new location. In all, the project was so unusual and complex that a local radio station and TV outlets both covered it.

It’s not every day that we have to wait for newspaper reporters to arrive before we can begin a move. The success of the project and publicity it received once again shows: the expertise and experience of Omega Morgan will pay off for a wide range of projects.