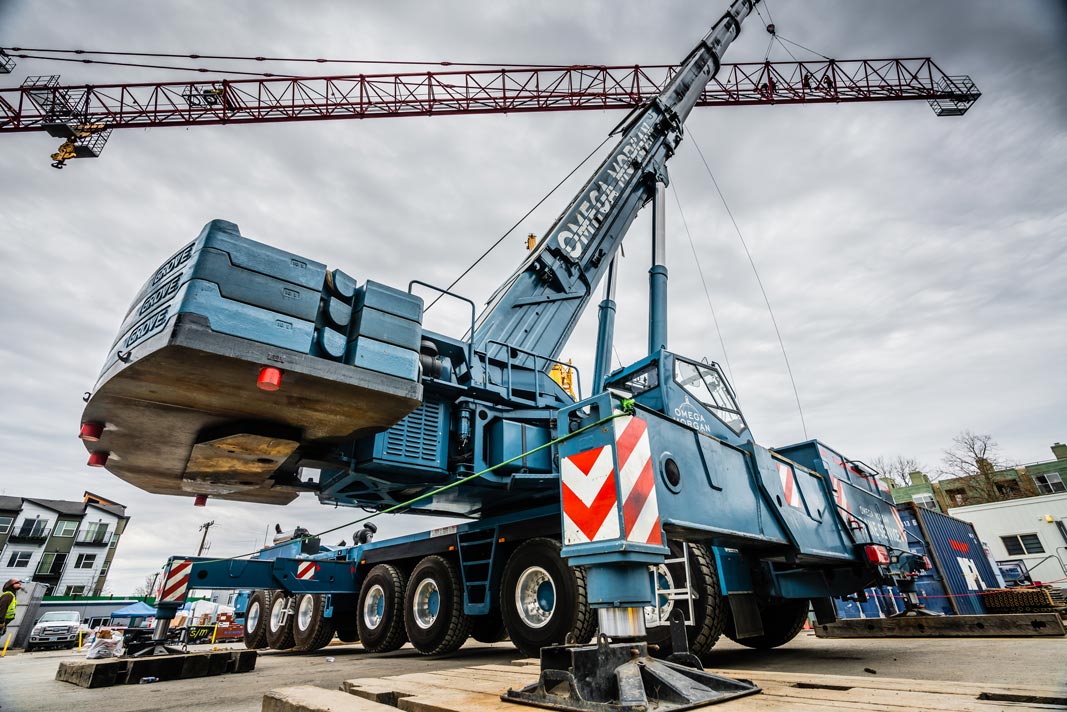 In March, Omega Morgan’s Seattle Office took on the task of participating in the disassembly of one of Seattle’s biggest tower cranes. Hoffman Construction, the contractor managing the project, had the crew but needed the gear. Our Crane Services Team immediately began pulling together the right equipment.

If you’ve been in Seattle within the last eight years, chances are you’ve seen a big red crane towering in the horizon. If you found yourself in the Northgate area, it was probably standing right over you. This 173-foot crane has become a landmark in its own right within the community, earning the name of “Big Red.” After playing a significant role in hauling equipment for the Sound Transit Roosevelt Station, it was time for Seattle’s biggest crane to retire.

Our team was brought on to supply two assist cranes for the erection crew: a 550-ton GMK-7450 and the 160-ton LTM-1130-5.1. To disassemble Big Red, we were facing two challenges: heavy weights and great heights. We dedicated months to pre-construction and pre-lift safety meetings to ensure a smooth disassembly process. We provided a lift director to supervise the assembly, disassembly and daily use of the assist cranes.

Using our assist cranes, the crew disassembled Big Red in nine phases. The heaviest pick was the turntable and mast which weighed in at an impressive 114,000 pounds. The Nelson Trucking Company loaded and trucked all of the equipment to Everett, Washington, where we were waiting to offload it with a 275-ton Grove GMK 5220 crane. After months of thorough preparation, the operation was completed successfully in only five days.

The result was a successful crane dismantle and a big step forward for Seattle. It was not only a huge success for Hoffman Construction and Omega Morgan, but also the local community and the Sound Transit project. Read the full case study here.