Transporting a 158,000 Pound Transformer and Slide Gear System at 500 PSF

Our client, Wildish Building Company, was contracted by the Eugene Water & Electric Board (EWEB) to upgrade an existing powerhouse. The project was complicated and required the removal of two transformers, and then an installation of two new larger transformers. The project also included the removal and replacement of a powerhouse deck. In order to comply with the limited deck loading, we jumped in to design and build a runway to distribute a 158,000 pound transformer and slide gear system load to 500 PSF. Our specialized transportation team in Portland moved quickly to help Wildish Building Company accomplish this job and delivered results, putting two crews on the project to ensure a successful completion.

We needed to haul two transformers from Eugene, Oregon to the Carmen Power House, located on the McKenzie River in Linn County. We loaded one transformer and hauled it 68 miles to the site. Once at the site, we had to wait to cross the McKenzie River, until the EWEB Engineering staff could monitor the bridge crossing.

Before the load could start to cross the bridge, Wildish Building Company had to place a dump truck on the far side for counterweight. After the load progressed substantially across the bridge, another dump truck had to be placed at the opposite end, before the load cleared the bridge. Once the load crossed the bridge, the load was backed under an on-site gantry and we unloaded the transformer and then set it on a slide gear system that was already in place. A second crew began to jack and slide this transformer into place while the transportation crew went back for the second unit.

To further complicate matters, the site was actively under construction, so the powerhouse deck was littered with raised pads and pedestals, and there were existing holes in the deck. In addition to working around these obstacles, the most challenging part of the project was yet to come. We were also limited to a 500 PSF loading on the powerhouse deck. In order to comply with the limited deck loading, we designed and built a runway to distribute the 158,000 pound transformer load to 500 PSF.

The most challenging aspect of the project was to design a plane to reduce a 158,000 pound transformer and slide gear system to 500 PSF. Typically, an allowable deck loading would be substantially more than 500 PSF.

We worked with Wildish Building Company and EWEB to get additional structural drawings of the powerhouse, that were not part of the original contact documents. After comparing these to the new project structural drawings, we prepared for all the obstacles we could encounter along the way. It took some intense pre-planning, but in the end, we were able to identify a path forward to construct our slide gear system in order to move the unit. We accomplished this by using heavy steel beams and wood cribbing.

Ultimately, we were pleased to have navigated a compressed timeline by putting two crews from our Portland office on the job, even completing it in record time. In the end, Wildish Building Company was glad to have worked with our team to complete this complex project and thanked us for all the intense pre-planning we did, which ensured a smooth operation. 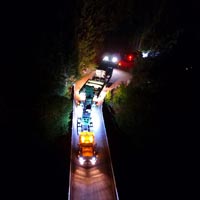